(instead of writing an individual post about every camp day, I just tried to sum it all up in one post. so this is the first post in my Slovakia recap! hope you enjoy).


I smiled a lot during those five days. I also yawned a lot, because let's be honest, I was hardly sleeping at all. (I could've gone to bed before midnight, but what's the fun in that?) I laughed at the antics of those kids that were outgoing + slightly rambunctious + troublesome. I repeated Slovak words after the kids in my group, trying to get them just right. I ran up + down the school stairs countless times. I walked out into the courtyard, breathing in the fresh air + listening to the teens talk during discussion group. I drank lots of Kofola during the course of the day. I followed my kids into the cafeteria, teasing + joking while we stood in the lunch line. I talked to Pica in the hallway, + helped Mrs. Donna + David with afternoon activities. I carried Andrej's and Juli's little girl around the hallway, trying to get her to stop crying.


I talked to Jakub + Lukas, + hid from Misko, who liked to intimidate me. I had David Cekov translate what the kid's were trying to tell me, + we laughed a lot at their silly speeches.

I walked with my arm around Dominika, one of the little girls in my group, and called for Denis to stop running for the hundred and eighteenth time. I said the Slovak word for five over + over so that I would remember the way it was pronounced. The kids laughed at me as I spoke.

I ate a lot of good lunches during those camp days. I carried some of my kids' trays to the counter when they were finished + usually David Cekov or David Mocan would take care of my tray for me.

I kept up with which of my kids were where, as best as I could. I followed Denis out into the hallway, telling him to come back to class. He just grinned at me. I usually had to get one of the Slovaks to make him come back to class.
I wrote down my kids names: Alexandra, Leah, Vanesa, Laura, Dominika, Michael, Patricia, Johanka, Martin, Misko + Denis. I thought that writing them might help me remember, but unfortunately, I still called them the wrong names all week.

I handed out blue camp t shirts and we posed for pictures. I laughed as they made comments in Slovak about how big the t shirts were. (We ran out of smalls too soon). We all gathered together and somehow fit all 62 kids + all the leaders into one picture.


I helped Lenka with doing the motions for the songs in assembly. We laughed + clapped when the kids did them along with us. We sang loudly, trying to keep up with Pica + the two David's. The kids cheered and shouted 'hoorah, hoorah, hoorah!' at the end of each day.

We went to the pool one day. I didn't swim, choosing to supervise instead. I wore Vierka's wedding + engagment ring for her so she wouldn't lose them. I joked with David Cekov that she had left him for a water slide. The kids splashed each other + dunked each other + tried to get me wet even though I wasn't in the pool. 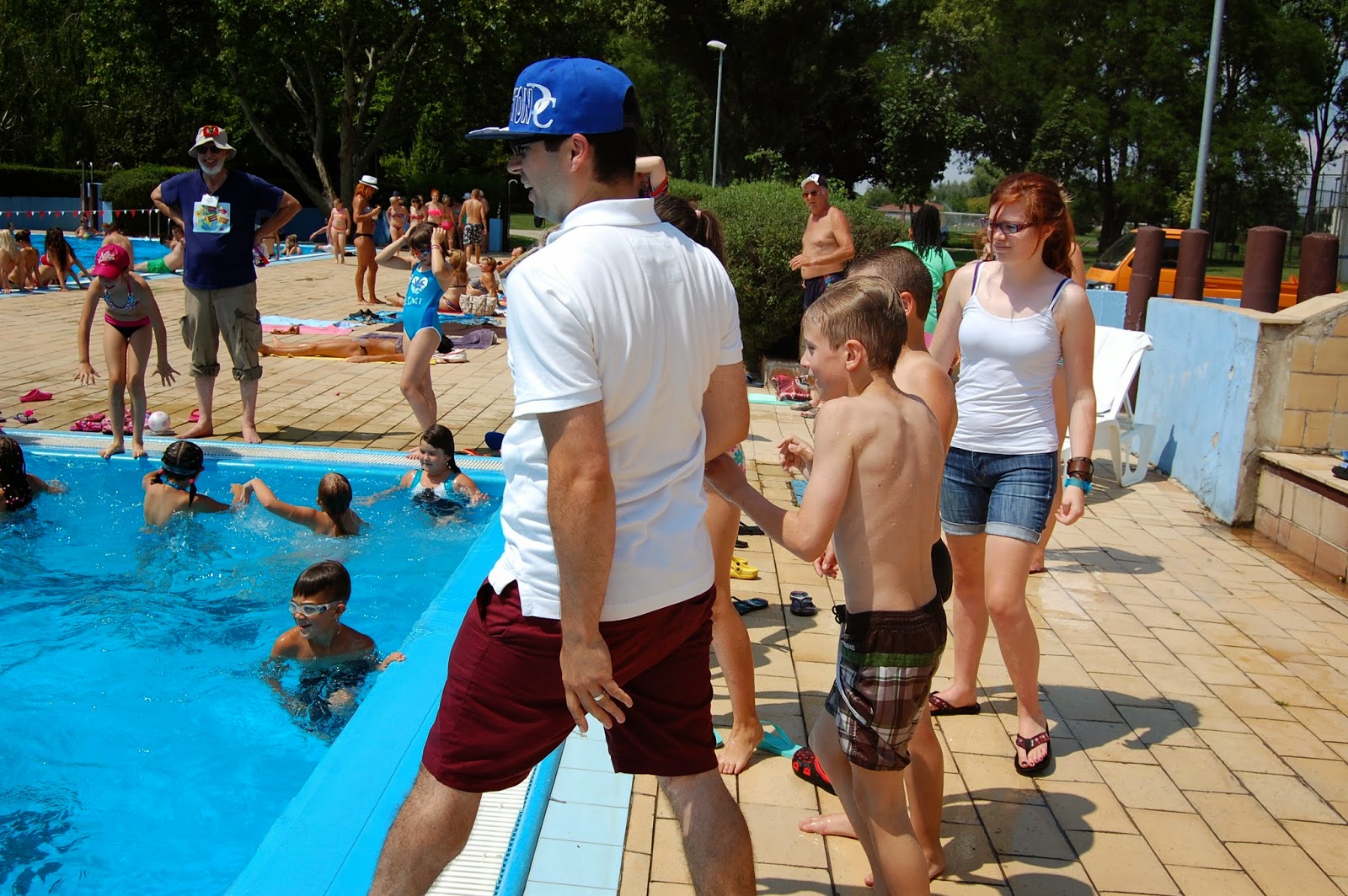 We ate ice cream cones after being in the pool for a few hours. I can't remember what flavor I got, but it tasted good. It was so cold and made the warm day slightly more bearable.

The kids loved to poke me in the side because they knew I was extremely ticklish. They would poke me and laugh when I jumped or squealed. It got to be slightly annoying (okay, very annoying) by the end of the week. 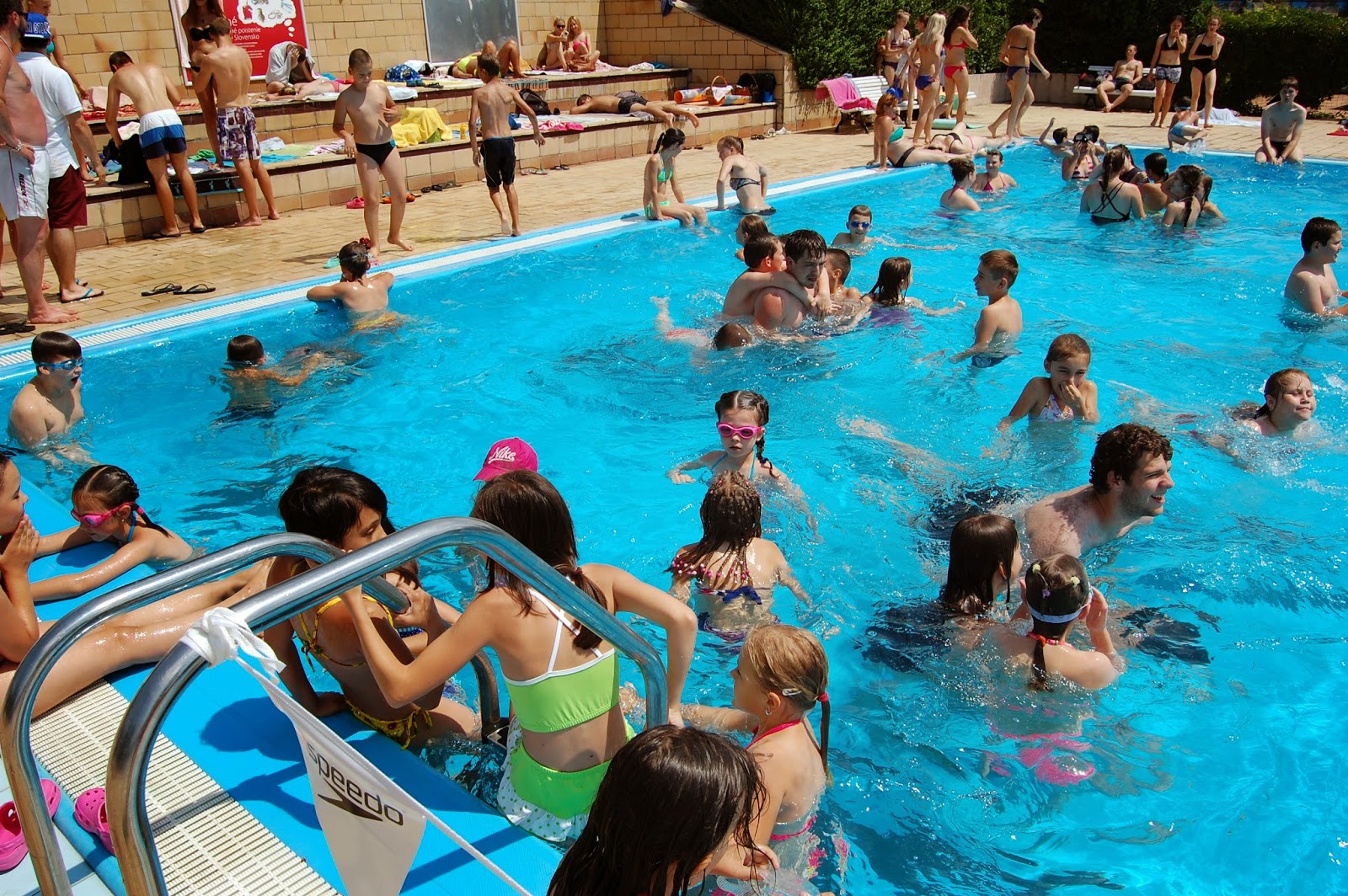 I had a sheet of paper that said who each of my kids was supposed to be dismissed to. Grandparents, aunts, mothers, and a few could walk home alone. It was almost impossible to keep up at the end of the day with who was where and who should be with whom. But somehow, all my kids always got home safely. That was always a relief.

Lots of hugs were exchanged at the end of the week. Lots of pictures were taken. I cried as we took all the decorations down + put the school back the way we found it. It was so hard to leave + to have the kids leave.

Those 5 days at camp can be summed up in a few words, I think: hard + wonderful + fun + tiring + magical. All at the same time. I'm very thankful for that school + those kids + the ability to have taken part two years in a row.